Vancouver BC – Traction Uranium Corp.  (the “Company” or “Traction”) (CSE: TRAC) (OTC: TRT) (FRA: Z1K), a mineral exploration issuer focusing on the development of discovery prospects in Canada, including its two flagship uranium projects in the world-renowned Athabasca Region, is pleased to report the completion of the diamond drilling program at Hearty Bay, located in the Saskatchewan Athabasca Region. Fourteen (14) diamond drill holes have been completed for 1,304 metres of diamond drilling in the program as well as 77-line kilometers of ground electromagnetic (EM) geophysics.

Highlights of the drilling and geophysics program are as follows;

The objective of the drill program was to test interpreted structural features and sandstone outliers based on the 2019 marine seismic survey in the main up-ice direction from the historic high-grade uranium boulder trains on Isle Brochet and beyond the known edge of the Athabasca Basin. Holes HB22-005 and HB22-008 intersected a 3m zone and an 11.5m zone respectively of brecciated and faulted basement rocks with hydrothermal clay alteration. The significant fault zone from 74.5m to 86m in hole HB22-008 is comprised of a 1.6m clay-supported cataclasite breccia immediately followed by clay, quartz and calcite occurring in fractures and smaller scale faults. This is encouraging as uranium mineralization in the Athabasca Basin is often found in proximity to hydrothermal clay-altered fault zones.

Hole HB22-008 is furthest to the NE from the high-grade uranium boulder trains on Isle Brochet in the main up-ice direction which supports that future drilling to discover the source of the uraniferous boulder field should continue in this direction.

The ground EM survey has identified previously unknown NE-trending basement conductors to the NE of Isle Brochet. Drill hole HB22-008 is located at the SW end of these new 2km-long subparallel conductors, pointing to a possible association with the encouraging hydrothermally altered fault and providing additional support for future drilling to proceed further to the NE along and targeting these new conductors.  See Figure Below. 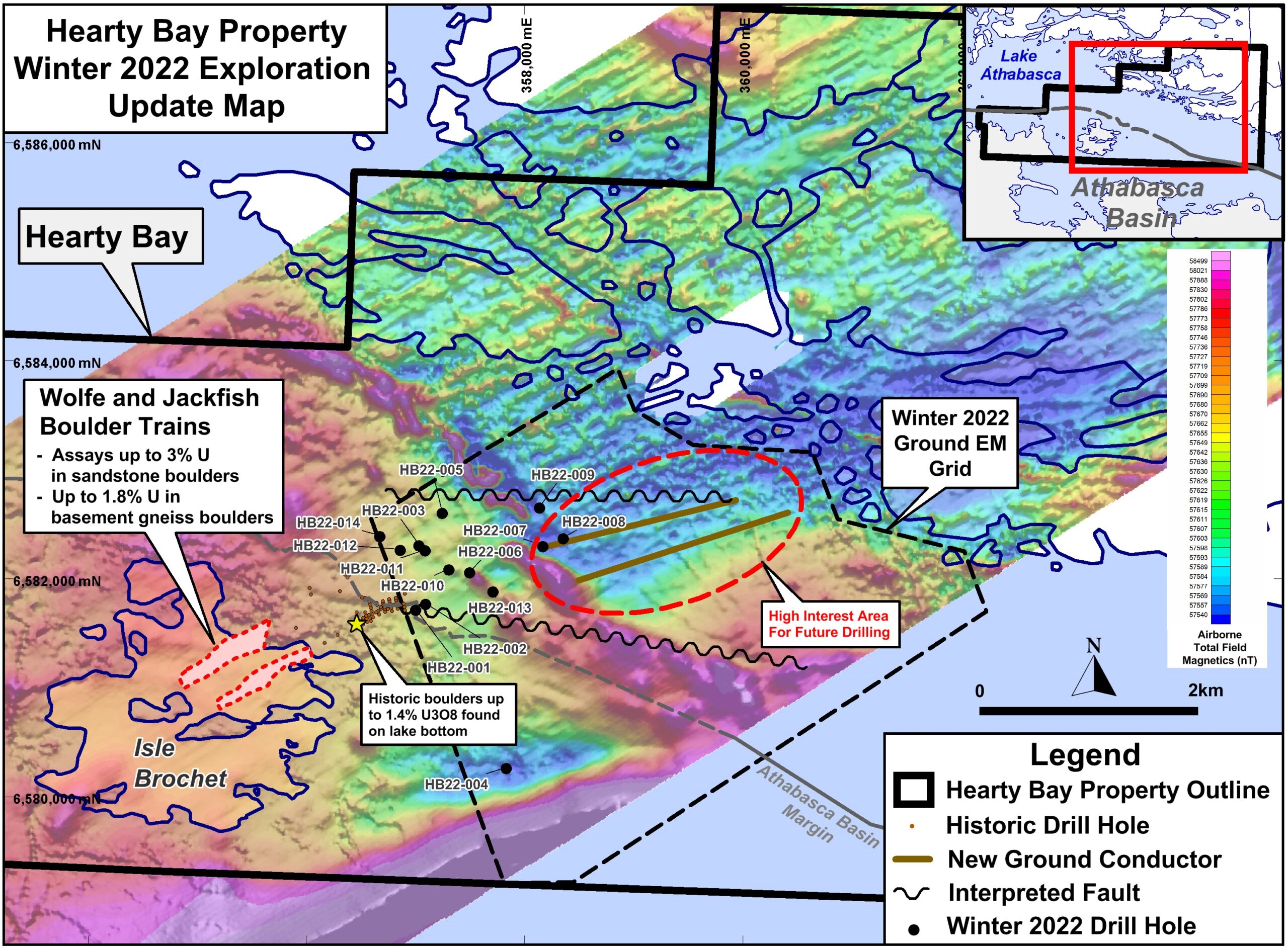 The technical information in this news release has been prepared in accordance with the Canadian regulatory requirements set out in National Instrument 43-101 and reviewed on behalf of the company by Raymond Ashley, P.Geo., Vice President, Exploration of Fission 3.0 Corp., a Qualified Person. Raymond Ashley has an arm’s length relationship with Traction.

Traction Uranium (CSE: TRAC) (OTC: TRCTF) (FRA: Z1K) is in the business of mineral exploration and the development of discovery prospects in Canada, including its two flagship uranium projects in the Athabasca Region. This property is located on the north edge of the Athabasca Basin, 20 km west of the Fond-du-Lac Uranium deposit and 60 km east of the Beaver Lodge uranium district. The Property surrounds the historic Isle Brochet radioactive-sandstone boulder trains, 1 km long dispersal trains trending along the main ice direction and containing up to 3% uranium. Approximately 600 m to the northeast several more radioactive boulders of both sandstone and basement origin were discovered. Historic drilling proximal to these boulders did not intersect any significant radioactivity. Drilling only tested the top of the basement lithologies, and did not extend very far beyond the edge of the mapped Athabasca sediments. The source of the boulders remains undetermined. Strong airborne EM conductors within the property were identified by historic surveys up-ice of the radioactive boulder trains.