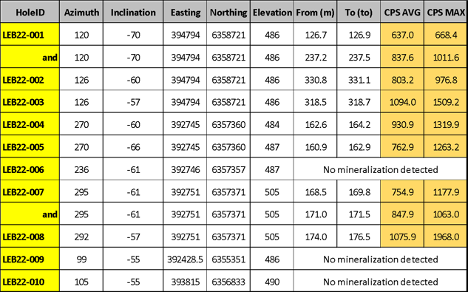 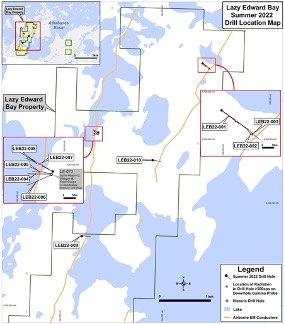 Lester Esteban, Chief Executive Officer, states “We are encouraged with the drill program at Lazy Edward Bay where 70% of the holes intersected anomalous radiation, indicating that the Western Horse Conductor is showing all the right signs for further work and warranting additional drill testing. Elevated levels of radiation, alteration and structure that had been demonstrated in the drill program are all favorable indicators of possible uranium mineralization nearby and our exploration team will be looking very closely at the geochemical analyses once received to reconcile with the drill data to define high priority follow up targets for our next drill program.”

The Lazy Edward Bay property is located halfway between Cameco’s Key Lake Mine and the high-grade Centennial uranium deposit, and hosts NE-trending conductive corridors similar to those associated with Key Lake and Centennial. The major uranium deposits in the eastern Athabasca Basin, including Key Lake, McArthur River and Cigar Lake, are along the NE-trending Wollaston-Mudjatik transition zone and conductive corridor. To the west of the property, the Centennial deposit is localized along the NE-trending Virgin River conductive corridor which transects the entire Athabasca Basin. The Key Lake mine, located ~50 km to the east of the property is accessible by Provincial Highway 914, serviced by the provincial power grid, and has an operating mill where the McArthur River ore has been processed.

The ongoing work program is being funded by Traction in accordance with the terms of the Option Agreement between Fission 3 and Traction, whereby Traction can acquire up to a 70% interest in the Lazy Edward Bay property (see Dec 10, 2021 Fission 3 news release).

Traction Uranium (CSE: TRAC) (OTC: TRCTF) (FRA: Z1K) is in the business of mineral exploration and the development of discovery prospects in Canada, including its two flagship uranium projects in the Athabasca Region.

Fission 3 is a uranium project generator and exploration company, focusing on projects in the Athabasca Basin, home to some of world’s largest high grade uranium discoveries. Fission 3 currently has 16 projects in the Athabasca Basin. Several of Fission 3’s projects are near large uranium discoveries, including, Arrow, Triple R and Hurricane deposits. Fission 3 is currently planning a winter exploration/drill program on its PLN project.

The technical information in this news release has been prepared in accordance with the Canadian regulatory requirements set out in National Instrument 43-101 and approved on behalf of the company by Raymond Ashley, P.Geo., Vice President, Exploration of Fission 3.0 Corp. Mr. Ashley has verified the data disclosed.