Calgary, AB – Traction Uranium Corp. (CSE: TRAC) (OTC: TRCTF) (FRA: Z1K) (the “Company” or “Traction”) and UGreenco Energy Corp. (UGreenco) are pleased to announce commencement of their Phase 1 Field Geological Program with mobilization of their field geological team to their Key Lake South Property in Canada’s world renowned Athabasca Basin, whereby Traction can acquire up to a 75% interest in the Key Lake South Property which is located approximately 6 kilometers to the southwest of Cameco’s Key Lake Uranium Mill.

An area of approximately 4.15 square kilometers is targeted for ground exploration with the objective of investigating surface uranium anomalies from the quantitative gamma-ray spectrometric survey of Ford et al. (2006) and the Athabasca Sandstone mapped in 1973 (AR 74H04- 0013). 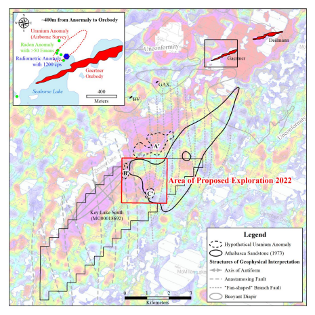 Figure 1. The area of proposed exploration 2022, covering surface uranium anomalies (“B” and “C”), the  southwest part of the Athabasca Sandstone mapped in 1973, fan-shaped faults interpreted from  airborne geophysics. The background map shows uranium content from the airborne gamma-ray spectrometric survey of 2005.

Boulder prospecting will focus on the two surface anomalies (“B” and “C”) from the quantitative gamma-ray spectrometric survey of Ford et al. (2006), searching for uranium-bearing boulders for comparison with those from the surface anomaly “A”, the “Hot Island” identified in the early 1970’s. Boulder mapping will apply to the whole area of the proposed exploration in 2022 in order to better define the outline of Athabasca Sandstone mapped in 1973 (AR 74H04-0013). Representative sandstone boulders will be sampled for boron assay.

Underexplored Since the Discovery of Key Lake Deposit

An extraordinary surface uranium anomaly was outlined in early 1970’s and believed to be transported  from a source in the northeast, which led to discovery of the Key Lake uranium deposit. Advanced  airborne geophysical surveys from both government and industry during the 2000’s depict a coincidence  between this surface uranium anomaly and underlying structures supporting a thesis that this anomaly  is in-situ controlled by structures rather than erratically transported by glacier.

A relic of Athabasca Sandstone was outlined by surficial photogeological studies with follow-up  reconnaissance mappings in 1973. After applying a hypothesis that surface anomaly has an offset of  approximately 400 meters to the north from orebody, supported by phenomenon at the Gaertner orebody (the insert map on Figure 1), adjusted locations of the highest uranium contents (A’, B’, and C’) perfectly sit around edge of the Athabasca Sandstone mapped from pebbles in till during 1973 (Figure 1), which may imply unconformity-type uranium mineralization preserved underlying the Athabasca Sandstone. 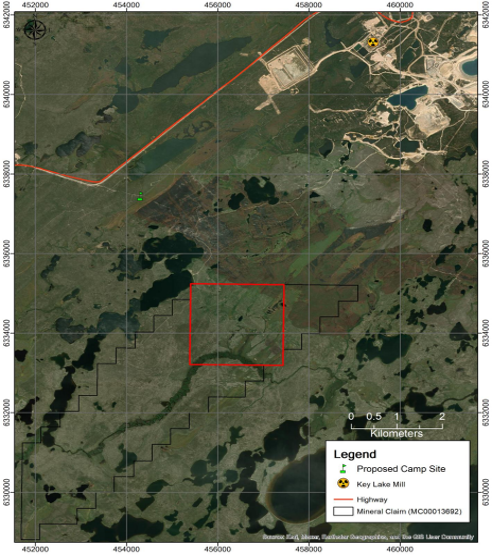 Lester Esteban, Chief Executive Officer, stated, “Unlocking the potential of our KLS (Key Lake South) Project and getting boots on the ground has been Priority #1 since inking the option agreement with UGreenco. Our team of specialized and experienced geologists and researchers have been looking forward to heading up and getting to work on KLS to complete Phase 1. Immediately after, our team will execute Phase 2 – a Ground Gravity Survey to really zero in on high priority targets ahead of our highly anticipated KLS 2023 Drill Program.”

Traction Uranium Corp. is in the business of mineral exploration and the development of discovery prospects in Canada, including its three flagship uranium projects in the world renowned Athabasca Region.

The Key Lake South Uranium Project is located approximately 6 kilometers to the southwest of the Key Lake uranium mill and in close vicinity to modern uranium mining facilities and highway transportation in northern Saskatchewan. Geologically, it sits at the southeastern edge of the Proterozoic Athabasca Basin – home of the world’s largest and highest grade uranium deposits and operations. Recent discovery of Triple R and Arrow deposits has demonstrated further potential of high-grade uranium at the edge of the basin.

The technical content of this news release has been reviewed and approved by Linglin Chu, M.Sc., P. Geo., who is a Qualified Person as defined by National Instrument 43-101, Standards of Disclosure for Mineral Projects. The information provides an indication of the exploration potential of the Property but may not be representative of expected results.

On Behalf of The Board of Directors

This news release includes forward-looking statements that are subject to risks and uncertainties, ‎‎including with respect to the Company completing phase 1 and phase 2, the Company acquiring any interest in the Property, timing of cash payments, share issuances and expenditure requirements, and development of the Property. The Company ‎‎provides forward-looking statements for the purpose of conveying information about current ‎‎expectations and plans relating to the future and readers are cautioned that such statements may not be ‎‎appropriate for other purposes. By its nature, this information is subject to inherent risks and ‎‎uncertainties that may be general or specific and which give rise to the possibility that expectations, ‎‎forecasts, predictions, projections, or conclusions will not prove to be accurate, that assumptions may not ‎‎be correct, and that objectives, strategic goals and priorities will not be achieved. These risks and ‎‎uncertainties include but are not limited those identified and reported in the Company’s public filings ‎‎under the Company’s SEDAR profile at www.sedar.com. Although the Company has attempted to identify ‎‎important factors that could cause actual actions, events, or results to differ materially from those ‎‎described in forward-looking information, there may be other factors that cause actions, events or ‎‎results not to be as anticipated, estimated or intended. There can be no assurance that such information ‎‎will prove to be accurate as actual results and future events could differ materially from those ‎‎anticipated in such statements. The Company disclaims any intention or obligation to update or revise any ‎‎forward-looking information, whether as a result of new information, future events or otherwise unless ‎‎required by law.‎

The CSE has neither approved nor disapproved the information contained herein.